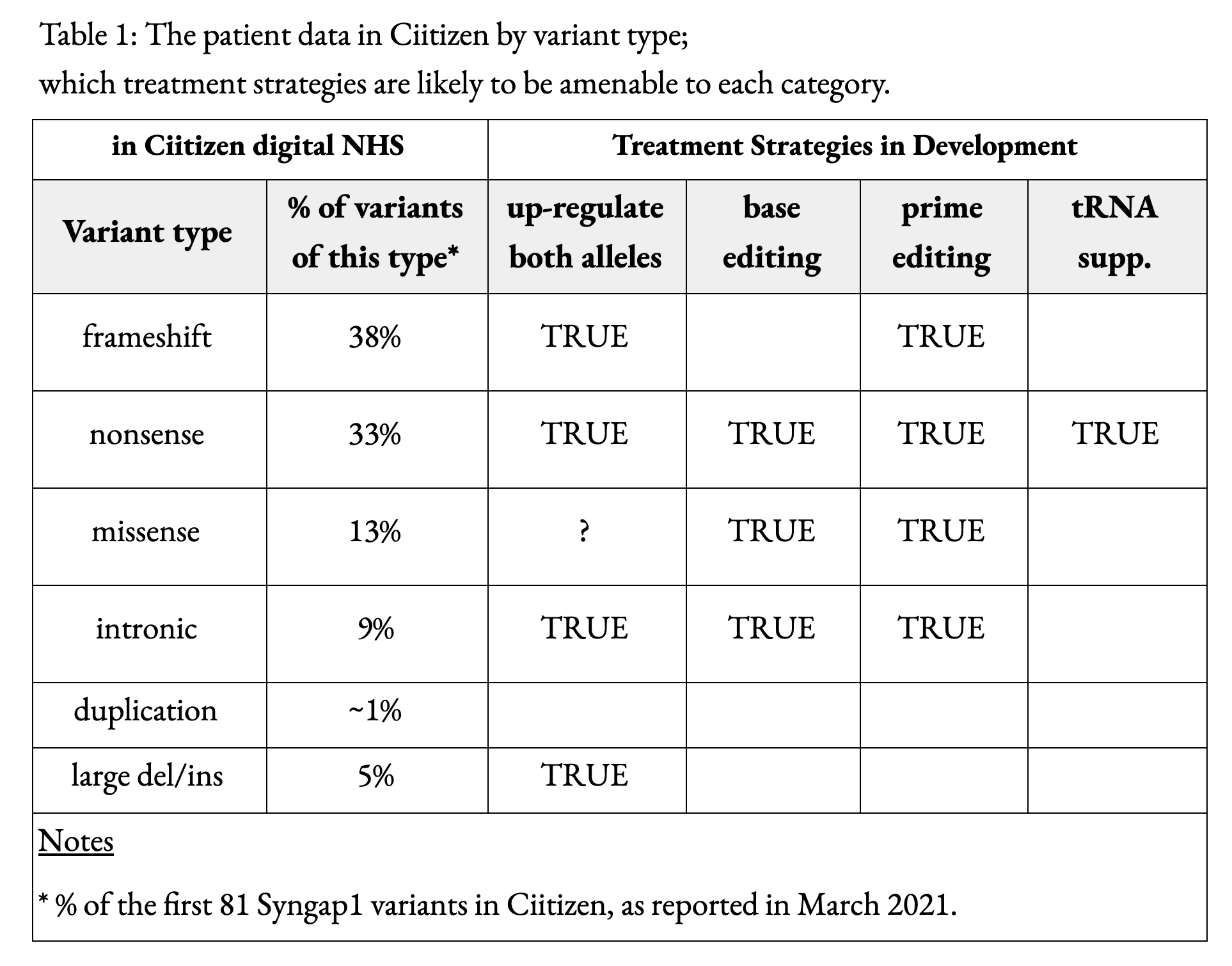 In 2020 SRF launched a digital Natural History Study (NHS) in partnership with a company called Ciitizen. An NHS collects the health information of patients in order to study diseases and test treatments. The beauty of SRF & Ciitizen’s digital NHS is that no extra clinic visits are required for data collection; clinical data is collected from existing health records after consent is given, and the data is then summarized and de-identified.

Families can join the Ciitizen SYNGAP1 study at no cost, and read this article about why this is important for every patient. Only yesterday another podcast described this incredible platform. Genetic variants of enrolled patients are reviewed by genetic counselors on staff at Ciitizen, one of whom, Elli, is a member of the SRF Scientific Advisory Board. The current list of SYNGAP1 variants found in the Ciitizen study can be found here.

The next step: Evaluating treatments in cell culture

Many different approaches to treatments are being developed in research labs, pharma and biotech companies right now.  What do they all have in common? They will all need to be evaluated in cell lines before they can be tested in patients.

Syngap Research Fund is excited to announce a project to create and share a set of patient-derived cell lines that can be used to evaluate therapies in development. Since Syngap is found mainly in brain neurons, the evaluation needs to be done in cultured neurons. It is not reasonable to take brain tissue from patients, but neurons can be generated from blood cells. First the donated blood is turned into induced Pluripotent Stem Cells, or iPSC lines. These are then turned into neurons in a dish.

Our aim is to help the entire Syngap patient population by providing a variety of patient-derived iPSC lines to test any and all treatments being developed. Each Syngap patient has a genetic variant, and the variants can be grouped into categories by the type of DNA change. Based on consultation with scientific partners, we have reviewed the list of variants in Ciitizen and identified which therapeutic treatment strategies are designed to work for which categories. (See Table 1 below.)

The treatments that we know of in development could all be tested by looking only at nonsense variants (see Table 1; all four strategies being developed should work on nonsense alleles).  We could simply make a few patient-derived nonsense iPSC lines and let the treatments be tested on those. However, since the Syngap patient population in Ciitizen is varied in terms of both DNA alteration and severity of symptoms, we are doing more than that.  We are choosing to create multiple lines to cover a variety of variant categories.  Our goal is to help the most broad set of patients as possible in the shortest amount of time with the least amount of preciously- donated funds.

We identified the following iPSC lines as covering the most patients and the most treatment strategies. (See Table 2  below.)

This is our approach for choosing variants to turn into cell lines:

2. We propose choosing two from each of the four most common types of variants:

o   Intronic: Nucleotide changes outside the coding region that result in alternate splicing

3. Within these categories, we chose the variants with the greatest number of patients, and chose variants to maximize the number of treatment strategies that can be tested.

-For base editing, three of the possible four strategies are represented.

-For prime editing, four variants near each other have been chosen to test the size limit for one editor.

-For tRNA suppressors, the most common (14/24) nonsense variant in Ciitizen: CGA (Arg) to TGA (stop)

4. In addition to creating patient-derived lines, each variant needs a family control blood sample. (When possible, a mom or sister blood sample is preferred for a female patient, brother or dad for a male patient.) The cost will be about $9,000/variant (including family control).

5. While we would love to create lines for all variants, funds are limited, so we have gone through this exercise to identify as first candidates the mutations that will be amenable to many different potential therapies, and thus most helpful to the whole community, both families and scientific stakeholders. Over time, as therapies and research develop, additional variants may be needed for further studies.

Once created, these cell lines will be strategically shared to an open-access cell line bank so they are very easily available to researchers. SRF is very excited about being able to collaborate in this way -- making valuable patient-derived cell lines easily available to any company or researcher who wants to test their technology on SYNGAP1 variants. Furthermore, ease of access to human-derived cell lines encourages researchers and therapeutic developers to choose SYNGAP1 as a target gene.

●  June: Families will be invited to contribute and schedule collections.

●  July - October: Work in the lab contracted by SRF to develop iPSC lines from blood samples.

In the process of developing this project we were notified that the Simons Foundation is about to release three cell lines based on SYNGAP1 patients.  The full list is here. With these cell lines available for study we will not use precious donor funds to duplicate existing patient-derived cell lines.

Since Simons is releasing these three lines:

We have revised our list accordingly to the following six patient-derived variant lines:

We cannot stress enough that choosing these lines is not excluding anyone from treatments.  Quite the opposite, the cell lines represent our broad population of patients, each of whom should be helped by many of the treatment strategies in development.  Creating and distributing this set of cell lines to any and all interested researchers will allow for comparisons, collaborations and confirmations that would not happen by chance, and that would not happen as quickly without this exciting project.

Please support this important work with a donation to SRF. If you would like to raise the funds to sponsor development of a cell line for a mutation not mentioned above ($9,000 / line), SRF will find an additional candidate in the Ciitizen database. All proceeds go directly to the project, not overhead, since SRF’s founders cover all overhead.  Remember, #smartdonors give through SRF.